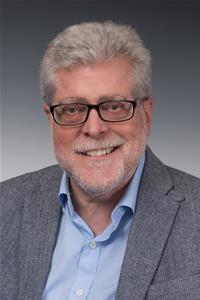 Other councillors representing this Ward:

More information about this councillor

Ross has been a councillor for 38 years, 24 yrs on the City Council and 16 for the Rushey Mead Ward. During that time he has been Leader of the Labour Group and the Council between 1999 and 2010. He stood down as Leader in 2010 to stand for Parliament in the General Election.

Ross led the biggest regeneration of Leicester in recent years with the Cultural Quarter and CURVE, the £350 million Highcross development, the £300m Building Schools for the Future programme, Braunstone Leisure Centre and a significant extension to the district heating scheme. Under his leadership the first Council Houses in 30 years were built. He forged a strong friendship with the late Richard Attenborough leading to the widely acclaimed exhibition of his Picasso ceramics at New Walk Museum. Followed by the donation of the collection to the people of Leicester. The Town Hall was extensively refurbished and both Taylor Road and Mellor Schools were rebuilt using council funds during this time. In 2007 City Wardens and Ward Meetings were created with budgets for each councillor to allocate to local projects.

In Rushey Mead he has dealt with hundreds of cases, helping local people. The ward budget has funded dozens of groups from football training to home security, festivals and fun days to Zumba dancing and keep fit.  He helped to lead the successful campaign to stop the closure of Rushey Mead library.

Ross has been Chair of the Overview Select Committee and the Children Young People and Schools Scrutiny Commission, continuing a long commitment towards children and education going back to 1985. The recent highly critical Ofsted report praised the scrutiny commission for ‘being tenacious in endeavouring to fulfil its function…’. His priorities were to see that we have a much improved service for children in need and looked after, alongside much improved education outcomes for every child in the City. Following the elections in May 2015 he has moved to Chair the Economic Development, Transport, Tourism and Sustainability Scrutiny Commission.

He is currently a member of the Housing Scrutiny Commission and is strongly advocating the building of thousands more council homes in the City to deal with the very real housing shortage in the city.

Councillor Willmott will not be holding ward surgeries until further notice, but can be contacted by email or telephone for any enquiries.

Appointments to outside bodies